Kristin Shaw lives in Texas and is a well-known automotive writer as well as president of the Texas Auto Writers Association. She won two Excellence In Craft awards for 2019 prior to taking the helm of TAWA.

Aaron Turpen is based in Wyoming and is a member of several automotive journalism groups. He is most well known for his reviews and opinion pieces in consumer automotive and the varied background he brings to them.

@2019 - All Right Reserved. Designed and Developed by PenciDesign
Tag:

At the 2022 Chicago Auto Show, Nissan unveiled three project trucks based on the all-new Frontier: The Adventure, the Hardbody, and the 72X. We walk through each of them with first impressions from friend and colleague Nicole Wakelin.

For more information on these concepts, check out our website: https://drivemodeshow.com/2022/02/09/…

The 2022 QX60 has been fully redesigned, bringing this luxury crossover up to date with lots of technology and posh design. With a powertrain shared with the recently updated Pathfinder, the QX60 now has a nicely paired V6 and geared transmission.

In this review, Aaron looks at the 2022 Nissan Frontier, which he thinks is “diggetysome.” Find out why.

The 2022 Pathfinder is completely new from the ground up. Nissan redid the well-loved Pathfinder and made it far better than it was before. Competitive in the midsized three-row crossover-SUV segment, the 2022 Pathfinder brings an improved powertrain, better capabilities, more interior space, and a lot of other improvements.

2021 Nissan Altima Gets You There

Fully redesigned in 2019, the Nissan Altima remains a mainstay in the mid-size family sedan market. The Altima ticks most every box for the sedan buyer and sees a little content shuffling this year to better appeal to those buyers. There is a price reduction for the lower end SV trim, the turbocharged engine moves exclusively to the SR trim, and most trims now have access to all-wheel drive and ProPilot Assist features.

There isn’t much about the 2021 Altima that is significantly better or different than its primary competitors on the market. At least, nothing that’s immediately noticeable. Its exterior design is good-looking, but basically contemporary, and its interior is roomy, but not outstanding. The Altima is basic, for the most part, and thus very competitive in the relatively sedate sedan market. Where the Altima shines is in the details. Especially the equipment levels and the price being paid for them.

The base level S and SV trims have a 2.5-liter four-cylinder engine that outputs 188 horsepower to the front wheels via a continuously variable transmission (CVT). The SV trim can be upgraded to all-wheel drive, which reduces engine output to 182 HP. But both the base S and SV trims have a six-speaker audio system, Bluetooth connectivity on a 7-inch touchscreen infotainment system, keyless entry and ignition, remote engine start, and basic advanced safety systems like forward collision warning, automatic emergency braking, lane-departure warning, and driver attention warning. The SV trim adds satellite radio, upgrades to an 8-inch touchscreen, and puts on the optional Driver Assist package from the S, which includes parking sensors, blind-spot monitoring, and rear automatic braking. With the SV, you can optionally add the Premium package, which adds Nissan’s ProPilot Assist advanced driver assistance items like adaptive cruise control along with several comfort upgrades.

The next trim to consider is the SR, a sport-themed option. This adds 19-inch wheels to the SV package, a more sport-tuned suspension, paddle shifters, and a leather-wrapped steering wheel and shift knob. The SR Premium package upgrades to the phenomenal 2.0-liter turbocharged four-cylinder engine with 236 horsepower (regular gas) and 248 HP (premium fuel). This engine is front-wheel drive only, but adds significant umph to the Altima.

Beyond the SR trim are the SL and Platinum trims, which are nearing the entry-level luxury sedan market in terms of accouterments. We’d suggest just jumping to the Platinum trim if that’s where you’re headed, as it has a load of goodies like 19-inch alloy wheels, ambient interior lighting, and more. It comes standard with AWD too.

For most enthusiasts, though, we’d recommend the SR Premium for the price point, inclusions and engine boost it gives. It’s a well-balanced value point with good return. If AWD is important to you, however, the SR without the Premium or the SV trims with add-ons are also a good choice.

Overall, the 2021 Nissan Altima is a good car with a smart set of specs. Its competitors are also good choices, though few can match the excellence of the ProPilot Assist system when it comes to daily driving usefulness in technology. 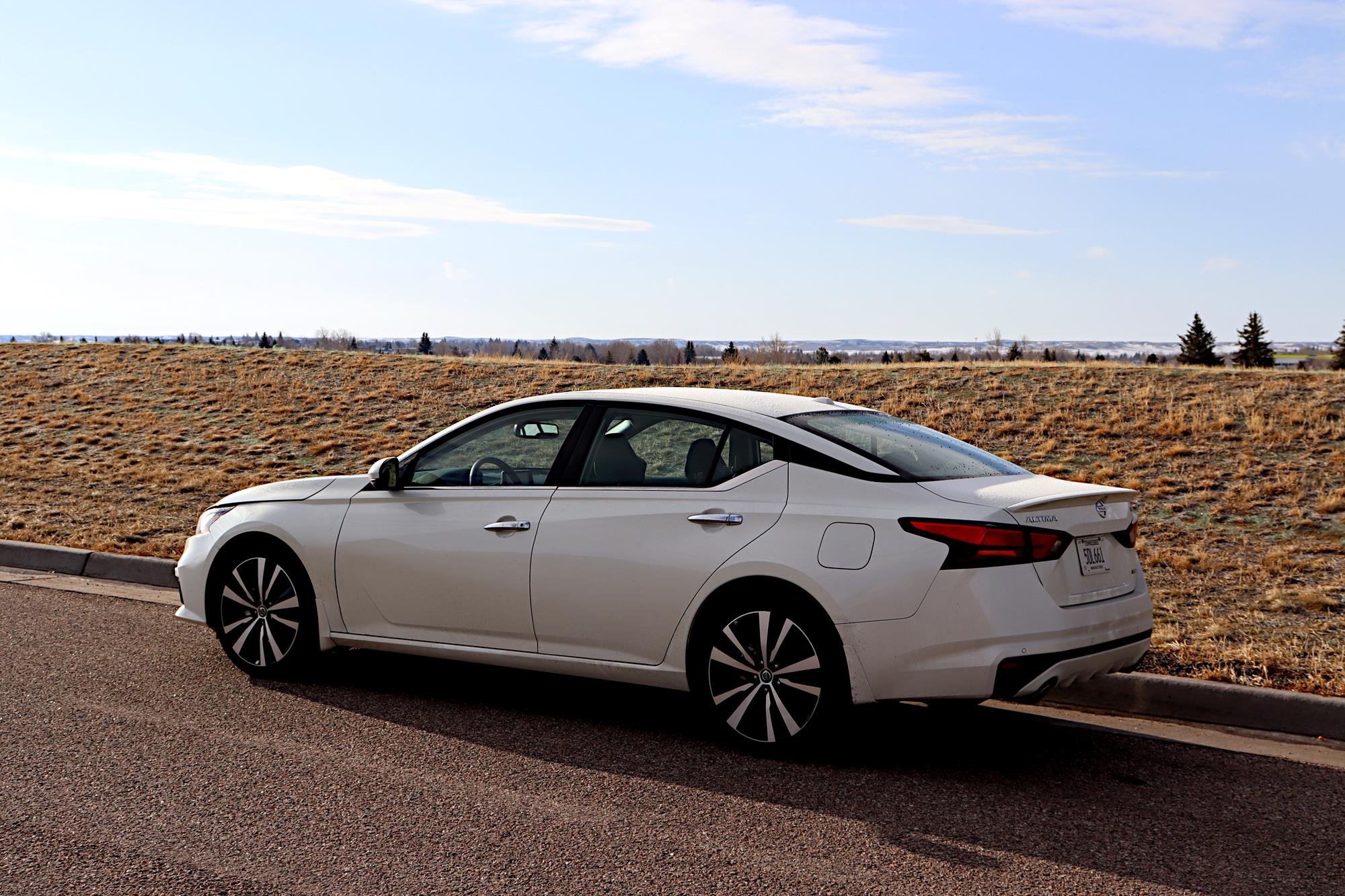 In this episode, Kristin and Aaron get in depth about the all-new 2022 Nissan Frontier. Totally redesigned, the new Frontier pickup truck is very, very well done. Aaron says it’s still a “trucky truck” and Kristin tries to diagnose what that means, exactly.

The Nissan Armada is the largest sport utility in Nissan’s lineup. It has heritage from the legendary Nissan Patrol and shares a lot of capability and underpinnings with the luxurious Infiniti QX80 that competed in the 2020 Rebelle Rally. In short, the 2021 Armada isn’t just another pretty SUV. It’s got chops.

For the 2021 model year, the Armada gets a few updates to keep it relevant to the competition. These may or may not make it competitive against newly reminted options from Ford and Chevrolet, but they are welcomed nonetheless. The most obvious of these changes are grille, bumper, and lighting changes to the exterior. The grille and bumpers are less aggressive and more smoothly executed for a less knobby look while the headlights and tail lamps are reworked to match. Inside, the 2021 Armada has a less ominous dashboard and center console and a larger infotainment touchscreen instead. All good changes to the big Nissan.

On the safety front, Nissan added most of its technology-based safety and driver aid gadgets to the Armada with good effect. Forward collision warning and mitigation, a better rearview camera view, blind-spot monitoring, and adaptive cruise control are now standard features, among other things.

The 2021 Nissan Armada comes in four trim levels, starting with the base line S, then the SV, SL, and Platinum. We drove the latter, finding it to be very luxurious in both equipment and appeal. Every Armada is powered by the same 5.6-liter V8 engine that outputs 400 horsepower and 413 pound-feet of torque. A seven-speed automatic transmission is standard and rear-wheel drive is the default. Four-wheel drive is optional and was present on our test vehicle. 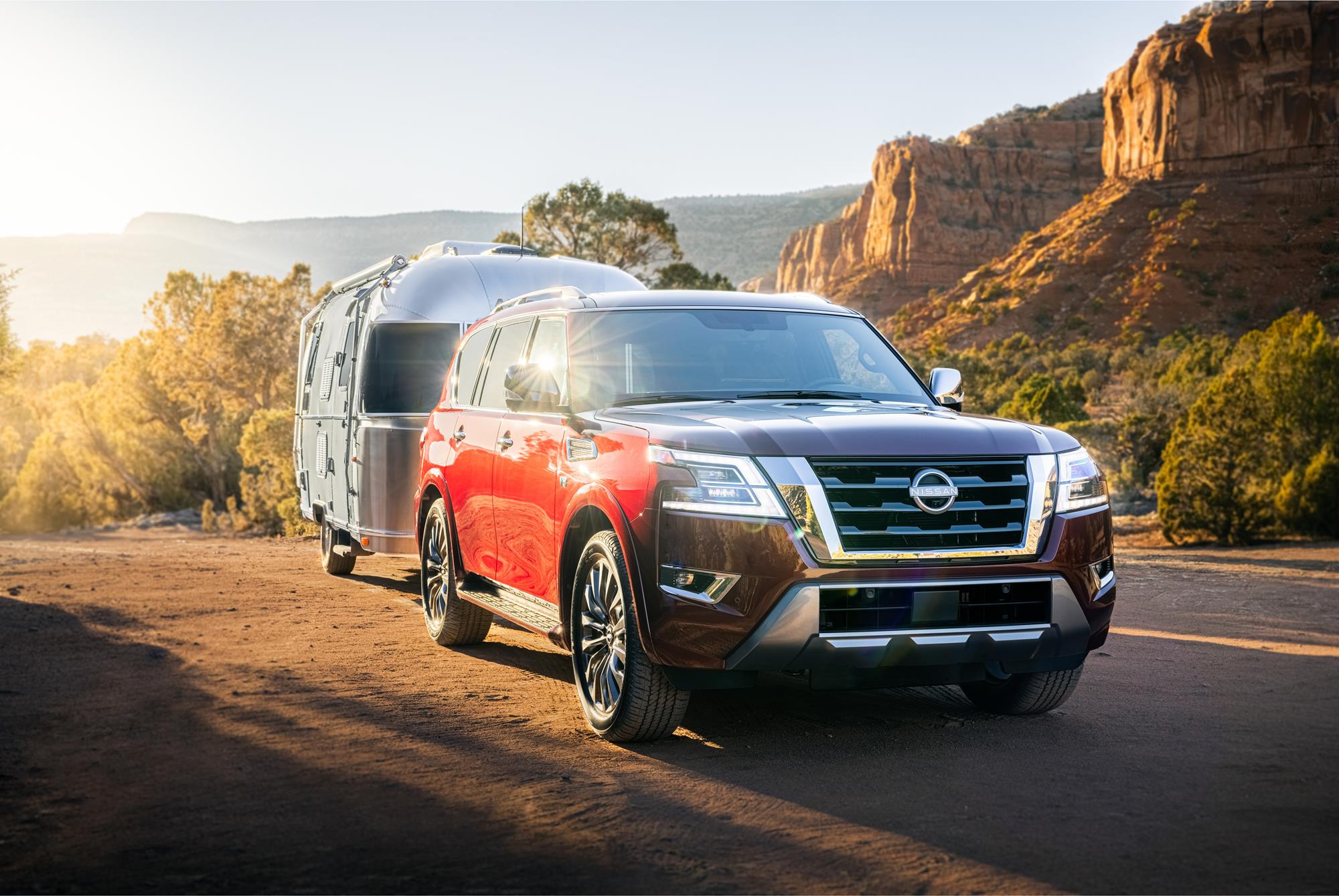 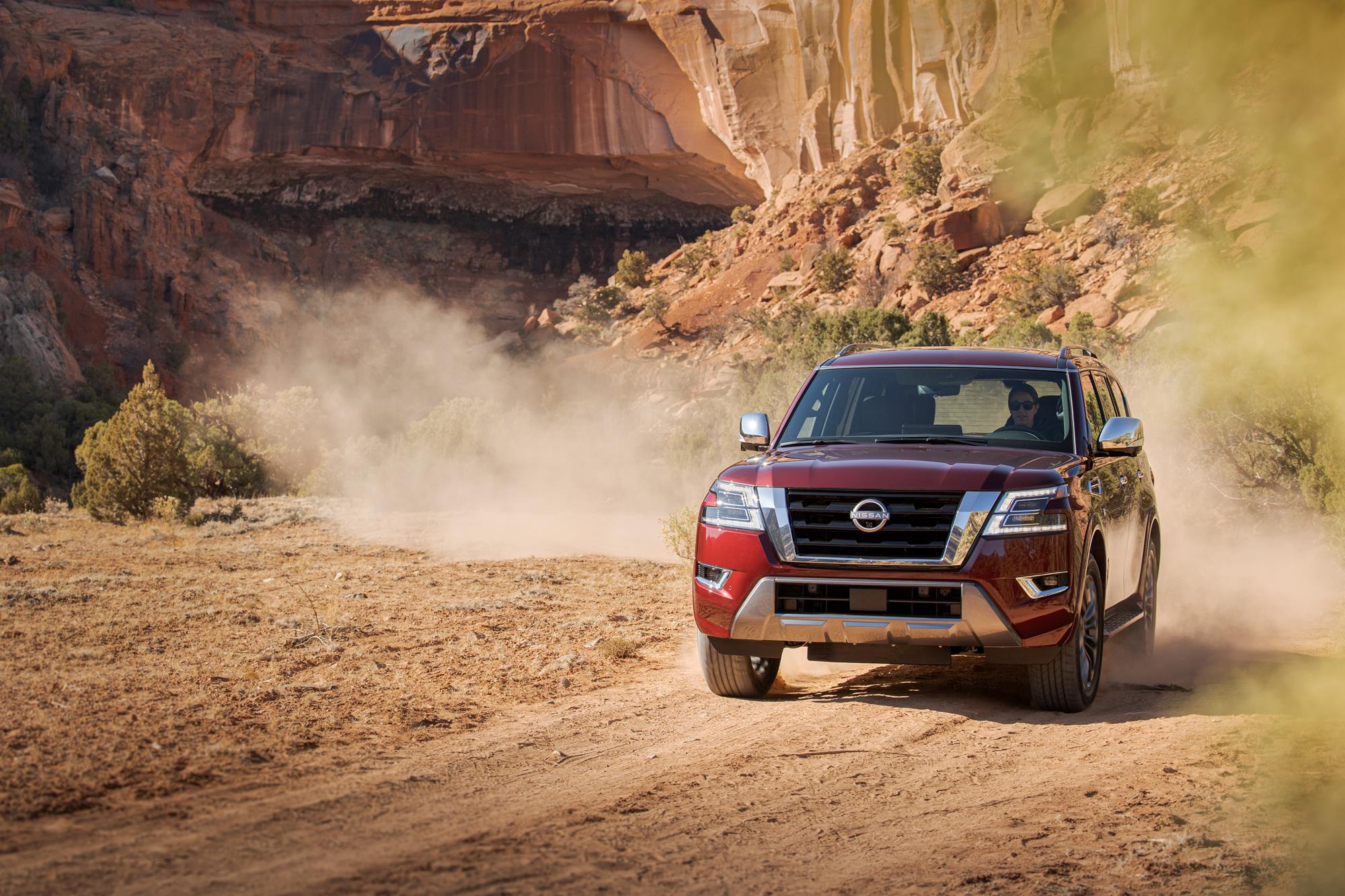 Interestingly, even the base model Armada now has the upgraded infotainment system. The 12.3-inch screen resides on the center stack but doesn’t dominate thanks to the overall humongousness of the Armada’s interior. The screen doesn’t look small, of course, but it doesn’t look like it owns the whole dash either. Apple CarPlay with wireless connectivity and Android Auto are standard features. So is a terrible four-speaker stereo system. That one quickly upgrades with each trim level increase, though, hitting a 13-speaker Bose setup at the top level. Way better.

Most of the upgrades as we go from trim to trim in the 2021 Armada are about looks and convenience. Things like 22-inch alloy wheels, a working roof rack, a power liftgate, towing and trailer controls, automatic windshield wipers, heated seating for more than just the driver, and power-folding third row seats are some of those upgrades through the Armada’s ranks. We highly recommend the digital rearview mirror, 360-degree surround-view cameras, and beautiful leather upholstery found in the SL and Platinum trim levels.

Out on the road, the 2021 Nissan Armada is a beast of a truck-based SUV. It drives very large because it is very large. It’s capabilities are high, though, with 8,500 pounds of towing capacity (when equipped) and serious off-road chops. The third row is a little cramped and is mostly for kids, really, but there’s seating for up to 8 in this rig, depending on its configuration. Those not wanting a third row can have it dropped in the upper trim levels to opt for more (and more accessible) cargo space instead. The third row does lower to lay flat, but it raises the cargo floor slightly and adds time to the parking lot stuffing of large screen TVs and lumber into the Armada.

The other big downer to a rig like this is fuel economy. Back in the early 2000s, getting 19 mpg on the highway in a full-sized SUV was phenomenal. Even for one labeled as a “hybrid.” Now? That’s pretty low. Most of the Armada’s rivals are well ahead and into the 20s with their highway numbers. Then again, if you’re shopping for a body-on-frame SUV, you’re probably planning on towing and MPG returns aren’t high on your list of requirements.

As-is, the 2021 Nissan Armada is a nice progression forward for the now-venerable SUV. It’s big, bold, and extremely capable. And now it’s a lot prettier and less in your face as well.

The Chicago Auto Show started this weekend and we were there for the press preview day before it began. This is the first major U.S. auto show in over a year, the last one being, you guessed it, the Chicago show in February of 2020.

Moving to a one-time summer format means that some of the show is outdoors and there is a lot to see and do. Here’s our quick rundown of what to see there.

For tickets and other information, see http://www.chicagoautoshow.com

In this special episode, Aaron and Kristin talk about one of the most legendary supercars on the road: the Nissan GT-R. With it’s powerful, handbuilt engine, extreme performance numbers, and iconic looks, the GT-R is a difficult car to miss. While it does have some downsides related to its age, the Nissan GT-R is respected by every car person and performance enthusiast on the planet. Or should be.

Review: 2021 Nissan GT-R – My Attempts at Being Unbiased Fail

In this video, Aaron tries to be unbiased and balanced in his look at the Nissan GT-R (aka “Godzilla”). He fails. But holy cow is this an awesome car!

This website uses cookies to improve your experience. We'll assume you're ok with this, but you can opt-out if you wish. Accept Read More